Why We Should Stop Saying “I’m Not Like Other Women”

Whether it’s being said by the quintessential tomboy, uttered by the woman who doesn’t remember the last time she cried, whispered by the woman who can’t handle pettiness, or touted by the theological nerd who’d rather discuss Van Tillian ethics than swap recipes, we’ve heard it before.

My mom heard me say it once, and I’ll never forget the day she did because she swooped in and pulled me aside. My mother, who we nicknamed the Spartan because she is not a crier. The woman we tease about being half Vulcan because logic forever rules the day. The mama who has no time for foolishness and is the most feminine and beautiful woman I know. She looked at me, shook her head and gently rebuked me.

So now, every time I hear another woman brag about how not womanly she is, I cringe.

Here are four reasons you may want to stop saying this.

Biblical womanhood is more than a stereotypical notion of femininity.

Although the phrase may conjure up a Victorian image of a shrinking violet who is never without her smelling salts (also a stereotype of Victorian culture, but I digress), that image isn’t found in Scripture.

Jael drove a tent peg through her enemy’s temple (Judges 4:21). Abigail was an intelligent woman who acted shrewdly in spite of her husband’s foolishness (1 Samuel 25:23). And even though we’ve discussed the fact that she’s not the only womanly example in the Bible, the Proverbs 31 woman herself was strong (Proverbs 31:17, 25) — as was Deborah (Judges 4:4).

In distancing ourselves from the dainty little stereotype of womanhood, we have to be careful not to distance ourselves from true, biblical femininity; which has more to do with a heart submitted to God (1 Peter 3:4) than anything else.

Don’t be the woman who equates clear thinking and decisive action with being “wired like a man.”

Don’t be the man who equates a compassionate heart and a sensitive nature with being “wired like a woman.” 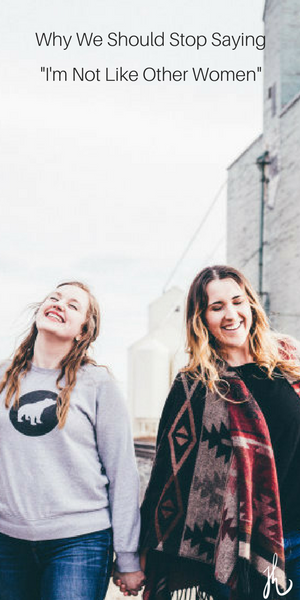 We’re Usually Trying To Build Ourselves Up

The day my mother turned and corrected me for this very statement, she said, “I hate it when women say that. It’s never to build anyone up but themselves. You are just as much a woman as anybody else. You don’t have to try to make it sound special. It is.”

When we say we’re not like other women, we’re saying, “Look at me! I’m not like other girls! I’m [smarter, stronger, more reasonable, more logical, etc.]. This is exactly why I don’t do friendship with other women.” It’s become an acceptable way to set ourselves apart from the crowd.

Ironically, in doing so, we’re usually shooting ourselves in the foot. This way to set ourselves apart from the pettiness of other women is inherently petty (Proverbs 6:17).

I have never heard a Christian man brag that he’s just more like a woman than a man; so if we’re trying to fight the stereotype that the comparison game is uniquely feminine, we’re failing.

And, finally, we’re usually saying it to alienate other women around us. We’re letting them know that “Hey, I’m special. You’re lame.”

However, I understand the tendency to say this phrase. Sometimes, it’s uttered with frustration! How often are we guilty of constructing a false paradigm of femininity, based, not on the Scriptures, but on cultural norms? How often do we alienate women who do not fit in with that paradigm, forcing them outside of our little cliques and isolating them? How often do we show preference to one type of woman over another?

But the answer to this tendency is not to give in to the cultural notions of femininity and try to set ourselves apart as more masculine than feminine. The answer is to reclaim biblical femininity and proclaim that, even if a woman doesn’t fit the cultural paradigm, she can still be decidedly feminine! The answer is to draw closer to our sisters in Christ, not to push them away. It’s to delve deeper into meaningful relationships that encourage women to be who God has called them to be.

Femininity isn’t flimsy enough to be caged in the color pink, and it is much too transcendent to be confined by our pettiness. You are a woman. Embrace it. Own it. Defend it, for God’s glory, and relish in the complexity of who God has made you to be.