Single For a Reason: Eight Lies We Tell Unmarried Women

This adage was my constant companion during my single years. Its purpose was clear: some women are single just because they’re waiting for Mr. Right, and some people are single because they’re actively repelling Mr. Right. I was only a single adult for half a decade before my husband walked into my life, but in those five years, I heard just about every reason why he hadn’t arrived yet.

For the purpose of this article, I’ve narrowed it down to eight things. But, rest assured, most of the singles in your life could add to the list.

Step one to finding Mr. Right is being approachable.

But not too approachable.

You need to be the perfect balance between Rebekah, minding her own business in that field, and Ruth, getting all up in Boaz’s business. Smile, nod, flirt a little, let him know you’re interested. But don’t smile too much, or nod too vigorously, or flirt too actively, or he’ll think of you as a floozy and not quite wife material. Send out the perfect vibes.

We know that charm is deceitful, and beauty is vain (Proverbs 31:30), but men are visual creatures after all. So you need to be the perfect balance of demure and feminine modesty that is a mask for drop-dead gorgeous beauty. Maybe you aren’t married because you are not dressing modestly enough for men to know that you’re not too invested in your looks. But then again, maybe you aren’t married because your modesty has a homely vibe, and you’re not visually stimulating the men in your life just right.

You’re Not The Right Kind Of Person

Step three, you need to be exactly the right kind of person.

For me, that always meant being exactly the right ethnicity. But black women aren’t the only ones who struggle with not being the ideal. You have to be culturally compatible with the Reformed in-crowd. You have to like the same movies, read the same books, and laugh at all of the same jokes. Even if you don’t have the right cultural background, you have to make sure you’re adopting the correct culture.

You Are Not Fittingly Intelligent

Be smart, but not too smart.

You need to be intelligent enough to educate his future children, but not so bright that you intimidate him. Study theology thoroughly enough to engage the men in your life, but not so thoroughly that they can’t keep up with you. 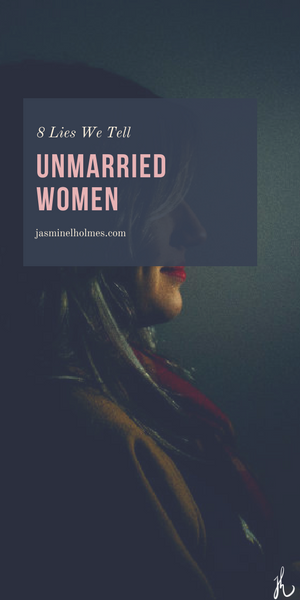 So, if you have a job that requires ambition to get ahead, maybe keep it a secret or switch to another field. Make sure all of the reading you’re doing is balanced with domesticity. A gentle and quiet spirit doesn’t mean humility, as the Bible might seem to suggest, but, rather, utter docility and vapidness whenever required. You may like books well enough, but don’t like them more than baking pies. And you may like pies well enough, but make sure you’re not only making pies.

And if any of these steps sound like too much work for you, let’s face it, sister, you’re just not trying hard enough! You must not want to be married! Be willing to step it up for your future man. Get out there! Get in the ring! You miss 100% of the shots you don’t take!

But, after all, I met my husband the minute I stopped looking.

So the key is just to stop looking. He’ll come when you least expect it.

The bottom line in all of these rules?

I just wasn’t good enough to get married.

And all of the married people around me had apparently met their spouses as a divine reward for being the perfect candidates. God’s grace and his purposes had little to do with their love stories — it was all their effort.

The truth, though, is that imperfect people get married every day. Perfection is not the key to finding a spouse.

My husband found me in my brokenness. Forget this list of eight things — I had about eight hundred things to learn in each and every one of these areas. And yet, the gift of Phillip’s love was given freely, not because I earned it by being the perfect prospect, but because God was gracious (1 Corinthians 4:7).

My greatest comfort as a single was that, ultimately, marriage was completely outside of my control. I wasn’t single because I was dropping the ball; I was single because God still had work to do in my life, and lessons to teach me in that season.

Do single people need to grow? Absolutely. But so do married people. Our marital state is not indicative of our spiritual maturity. All it indicates is that God is most glorified to work on us in whatever season he has us in.

The moving target of being the perfect prospect is full of disappointment. The only satisfaction in this life is found in growth that focuses on Christ alone as its reward. That doesn’t mean we don’t pray for marriage, or hope for marriage — but I hope it releases some of the ungodly pressure of trying to be the perfect bride. She does not exist. But praise the Lord for the Bridegroom who is perfect in our stead — whether earthly marriage comes or not.