Our Teachings on Purity Must Be Rooted in Scripture

Young woman, your brothers are watching. They already have to live in a world that is full of sexual temptation, from magazine racks to movie screens. As a single woman, your virtue is your biggest asset. Young men are looking for wives who understand modesty. When you get married, your husband’s sexual purity depends on your sexual availability. If you’re not willing to live out his fantasies in the bedroom, he’ll live them out elsewhere.

This speech has christened many a Christian blog, conference, and conversation. My parents never gave it to me growing up, and I am forever grateful — but it bombarded me in other places.

Its damage is this sneaky message: Young woman, your body is a weapon. Its purpose in marriage is to fulfill your husband’s desire, but, outside of that, all it can do is cause men who are not your husband to stumble. So be modest so that you can keep the weapon contained because your brothers in Christ need this. It’s your duty.

This emphasis neither honors women nor respects the men around them. It devalues a woman by chalking her worth up to her virtue and dehumanizes a man by claiming that he can’t help but be led around by his lust. It also takes the focus off of our Savior.

Tale As Old As Time

We’ve talked before about the blame shifting that began in the Garden when Adam threw Eve under the bus for the sin that they had both committed. The “that woman you gave me” defense.

And when we think of the stereotype of the fallen woman, we’re usually imagining a Bible-thumping traditionalist shouting her down from his high and mighty perch.

But Christ’s example stands in direct opposition to this stereotype. He called adulteresses out on their sin, but he also offered them eternal life (John 4). His words towards fallen women were no harsher than his words towards the men who were about to stone them (Matthew 22:33; John 8:7). His focus in the adultery discussion is not on the act, but on the wandering eyes that lead to it (Matthew 5:27-28). His focus is not on the woman that men lusted after, but on the men who are lusting. And to emulate Christ, husbands are called to lay down their lives for their wives (Ephesians 5:25), not because their wives deserve it, but because God commands it. 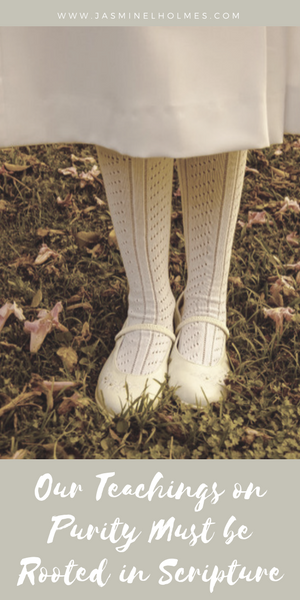 Adam blamed his bride for his transgressions, but Christ stepped in front of his Bride and sacrificed himself for her. Her purity comes from his sacrifice, not from her own merit (1 John 1:7).

So where has our tendency to browbeat women about purity come from, if not from the text?

In Chapter 12 of her book, Total Truth, Nancy Pearcey offers historical context for the way that we view virtue and the sexes.

The concept that women are responsible for guarding the virtue of the men around them is a relatively new phenomenon. Wives and husbands used to work alongside each other to build the family economy, but as the Industrial Revolution took men away from their homes and into a more corporate world, women’s household duties became a bit more strident, and their idealized roles in the family became a bit more marked:

“They were called to maintain the home as an area cordoned off from the competitive, dog-eat-dog ethos of economics and politics. Women were to cultivate the softer virtues — of community, morality, religion, self-sacrifice, and affection. They were urged to act as moral guardians of the home, making it a place where men could be renewed, reformed, and refined — a place of ‘retirement’  from the competitive, amoral world outside.” (p. 333)

“In colonial days, husbands and fathers had been admonished to function as the moral and spiritual leaders of the household. But now men were being told they were naturally crude and brutish — and that they needed to learn virtue from their wives.” (p. 333)

Pearcey concludes, “For the first time, moral and spiritual leadership were no longer viewed as masculine attributes. They became women’s work.”

Whose Job Is This?

If Pearcey is right, then our hyper-focus on a woman’s responsibility to protect her brother’s purity comes, not from biblical truth, but from cultural norms.

The burden of these messages is clear: woman, it is your job to fiercely protect the purity of every man in your life by being perfectly virtuous. If they fail, it is because you have failed them. Your dignity is earned by your purity.

The principles of modesty have been co-opted by a culture where men are treated like little boys who think with a certain member of their anatomy that’s nowhere near their heads.

Where is Christ in this imagery?

Unfortunately, his sacrifice has taken a backseat to our perceived responsibility as women to keep a man’s way pure (Psalm 119:9).

Woman as Servant, Not Slave

Sexual purity isn’t bad. It’s good and holy. And sexual promiscuity is a damaging sin that has ravaged many a marriage.

However, our sexual purity is not merely in service of the men in our lives, as though our perfection could make them righteous. These things are in service of God. They should be taught in the context of building up the whole woman, not in an isolated way that teaches a young woman that all she is is tempting flesh. The scriptural commands for modesty are rooted in holistic church community, not in drive-by frustration at short hemlines.

We honor our bodies because they were made in his image (Genesis 1:27, 1 Corinthians 6:19). And, coincidentally, our dignity as women comes — not from the way we dress, speak, or act — but from this fact. We honor the marriage bed because it is part of the bigger picture of Christ’s relationship with his Bride (Hebrews 13:4). We honor our husbands because of the position they have been given by God (Ephesians 5:22). We realize that the marriage bed is the only place for sexual desire to be properly fulfilled (1 Corinthians 7:9), but we also realize that our battles against lust are not primarily about our flesh (Ephesians 6:12).

Even as married people, our lust cannot ultimately be quelled by the emotional, spiritual, or physical availability of our spouses, but by Christ. And even when we fail to come to the altar as history-less virgins, Christ’s sacrifice is enough to make us whole. After all, God’s grace is a beautiful fixture of Christ-honoring love.

Are women to pursue virtue? Absolutely! And will this pursuit be an encouragement to the men around them? That is my earnest hope. But a woman is not ultimately the gatekeeper of virtue — the Holy Spirit is (Ephesians 4:23). Her body belongs, first and foremost, to her King.

This is true for the woman parading herself around for men’s approval, and for the one who’s scared to death of causing them to stumble: Christ should be her ultimate focus. Young women need to be taught the principles of purity couched in the guiding truths of the Gospel, not as a list of rules and regulations they follow for the sake of the men in their lives. Otherwise, I fear we’re just trading one form of sexual frustration for another.